The Year of NO 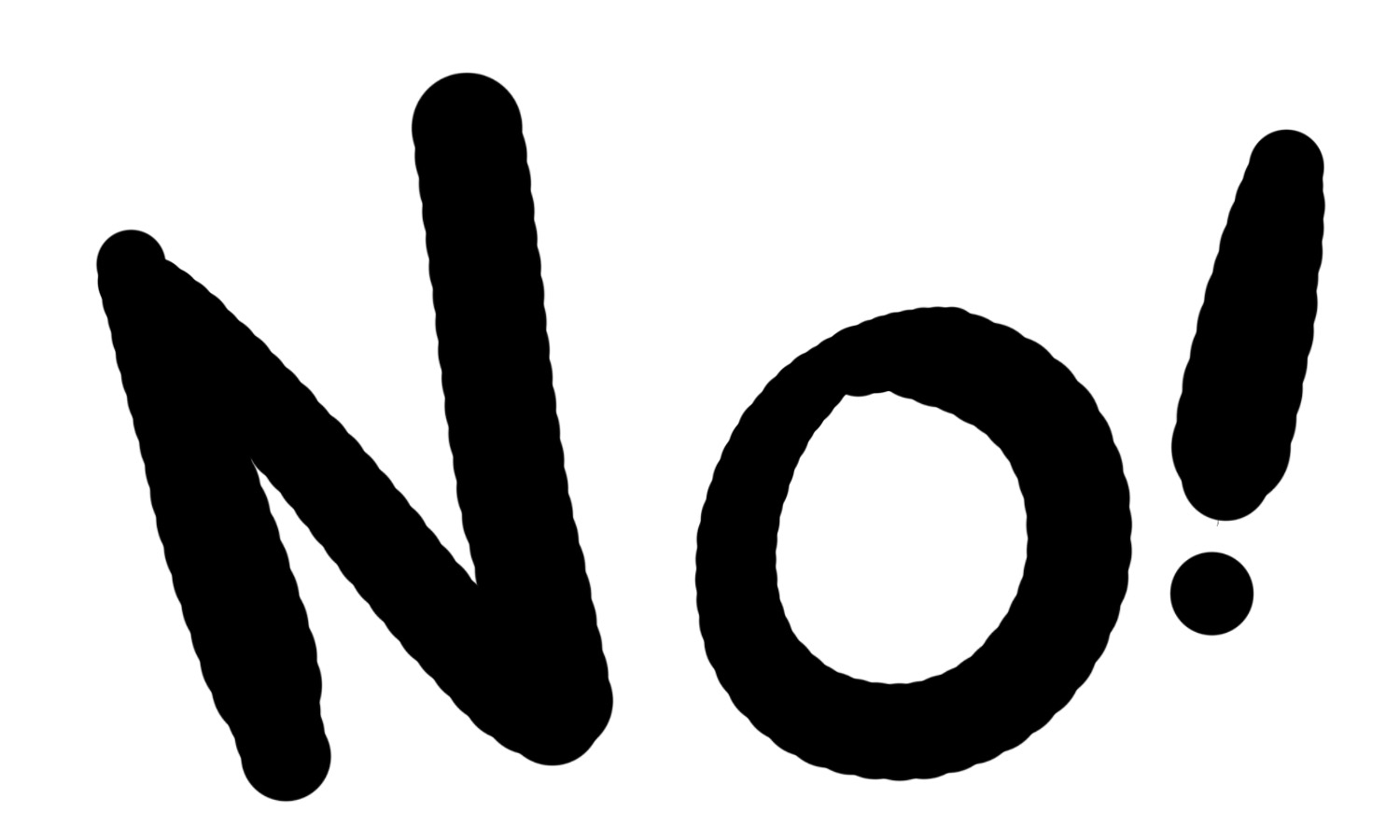 “No.” Such a simple
word that means so much. For children, it is a way for them to celebrate their
newly found independence. It is a healthy, normal part of a child’s growing
autonomy. No is a way for children to assert their power and it usually gets
the attention of the adults around them. Toddlers are beginning to feel big and
are learning just how far their independence will take them with the simple
phrase of “No!” But somewhere between this stage and adulthood, we began to
give less power to those two letters. No longer is our independence as
important to us. A fear sets in and we start to generally ascribe to yes
because:

We became afraid to use no.

We lost confidence in the ability of its
strength.

We started to account more for others’
feelings instead of our own.

We started to make excuses as to why no isn’t
necessary in some cases.

We thought that our no would be more hurtful
than our yes.

When quite frankly all of the above mentioned is
the opposite. If you rarely say no, you open yourself up to the overextension
of yourself, which will cost you your well-being.

While I was aware that
learning the importance of saying “No,” was essential to my success, that
lesson was tested as I ended 2017 and entered into 2018. I realized just how
much being a “Yes” woman exhausted me in every area of my life. I finally had
the time to search those very areas and below I share how each pushed me to
once again embrace the same independence as a woman that I had as a toddler.

“You are pouring from an empty cup and if you don’t
stop, everyone around you will accomplish their dreams except you,” was the advice
that one of my good friends gave me. It was the realest advice I have ever
received because it was true and though hearing it hurt, I needed to hear it.
He was right, I was so eagerly pouring into everybody around me that I had
nothing left to give myself. I was pouring into my family, my friends, my
relationship, my mentees, the students I worked with both former and present,
and anybody else that I happened to attract. The fact is I was saying “Yes” to
everybody, ready and available to be whatever and whoever they needed me to be.
I didn’t realize how many roles subconsciously I had taken on until I was
exhausted. “No” was a foreign word to me when it came to pouring into others
because I felt that it is what I was supposed to do. I told myself that if I
can be there, I should be. I rarely took the time to see that if I am empty,
how I could be of any assistance to anybody else. If I am being honest, maybe I
felt inadequate in other parts of my life so in the areas I felt I had control
over should be given my full attention. I made myself to be a resource for
everybody and while this is not necessarily a bad thing, the moment you make
yourself available to that you have to maintain that character even when you do
not want to. No one even asks to be poured into but because of who I am when I
see the need, I want to repair what so clearly needs to be fixed.  This was my reality and in order to pour back
into myself, I had to start saying “No”. I had to stop being so easily
accessible. For a while, I felt bad because I could not be there for others
like I usually had been but I was reminded that I need me just as much as they
need me if not more. I essentially learned to say “No” to the constant deposits
into those around me and chose to start depositing that same energy into myself.

Both your brokenness and healing will attract people to you.
They are either attracted/relating to what inside you is broken or they are
intrigued by your strength. When you’ve been blessed with a big heart and
you’ve done the intentional work to heal, your minimum requirement when
entering both friendships and relationships is they need to be on that road as
well. It is okay to help others but learn to give people the tools so that they
can guide themselves. Just as a mother initially breastfeeds and/or uses
formula until they transition to table food that is exactly how you have to
feed into others. Eventually the mother has to wean the baby off breast milk
because when they are receiving from her, it can deplete her energy. Not only
does it deplete her energy, the baby needs to become independent enough to eat
and feed themselves. We have to do the same and learn to wean ourselves off of
the dependency of always being there for other people and extending resources
we may not even have for ourselves. As you are still gaining the discernment on
what and who to pour into, be careful as a broken person could be a distraction
in this season. You will attempt to heal and rescue them if you haven’t learned
the discernment you need to with the heart you have. Start to identify the type
of people you are attracting to gain guidance on what is best for you in each
season. Begin to say “No” to the wrong things you attract so that you can have
room to attract all that is for you.

Proverbs 4:23 reads “Above all else, guard your heart,
for everything you do flows from it.” I have always taken pride in how balanced
my mind and heart have been or so I thought. I realized that because of how big
my heart is, I have not always guarded in the way that I should. I came to see
that I have allowed it to say “Yes” to things that were illogical. I allowed
emotions to drive many of the yeses especially when it came to matters of the
heart. I thought that people deserved more time, chances, and energy just
because of how I felt about them never realizing how I was hurting myself in
the process. I allowed my heart to stay in friendships and relationships for
the sake of the other person’s feelings, neglecting my own. The heart is
sensitive and pure, which is why God told us to guard it but no one ever
teaches you how to find the balance between guarding and allowing yourself to
feel love. I always found myself on the opposite ends of the extreme, rarely in
the middle. Even when life caused people to walk out of my life or situations pushed
things to shift around me, I realized just how hard it was for my heart to no
longer say “Yes” to those things and people. I had to learn in my healing how important
it was for me to say “No” in order to move forward with all of my heart with
nothing holding me back.

A purpose is the reason for which something is created
or exists. Saying “Yes” to everything and everybody around you doesn’t leave
you the energy to say “Yes” to yourself or God. The things you are constantly
pouring into leaves you less time to fulfill the purpose destined for you. I
believe that each of us have a purpose over our lives and there are things
attached to it that have a window of time in which we have to work towards it.
Some of us have yet to identify what our purposes are nor have we taken the
intentional time with God for him to guide us to it. We are so burdened, busy,
and distracted pretending to live our best lives with no real purpose driving
us. I realized that if I am living aimlessly with no purpose driving me, it is
in fact my worst life. I had to get completely in tune with my inner self and
be motivated by things that were destined for me. I had to decipher the
difference between my destiny and wants knowing that one led me down the right
direction while the other did not. I had to learn to say “No” to everything
that dared distract me from what God had for me so that I have the room to say
“Yes” to that very purpose. Your purpose deserves the “Yes” but you first have
to say “No” to the things that take you from it.

The NOs are necessary for
the Right YES

Learning to say “No” has been one of the hardest
lessons I’ve had to learn in this season and I will be honest that it has made
me quite uncomfortable. Once I put all of this into perspective and learned to
make my self-care a priority; it made sense. When you truly love and care about your well being, learning this lesson is a necessity. If I do not start saying an
intentional “Yes” to the right things, I will remain stagnant in my journey. I
realized that my heart, mind, and soul matters just as much as the people
around me. I also came to grips that the full cup that God made for me was for
me but if I am being careless with it, then I am wasting away what he created to deposit into my own calling and purpose. I had to let go of the fear of disappointing others and learn to
appreciate who I am/what I can give. In addition to that, I had to get over my
fear of what will happen when I completely submitted and said “Yes” to my dreams
so essentially I had to start saying “No” to fear and doubt. Saying “No” starts
to shift the things around you so that you can be led to the things that you need
to walk into.

In 2018, take this new beginning to start placing boundaries in
your life so that you have the room to pursue every dream on your heart. Your
PURPOSE depends on you learning to say “NO.”

Hi! I'm Jasmine!
Here you will find life lessons, testimonies, and epiphanies I have been fortunate to glean from various transitions in my journey. I hope that you can find some inspiration and motivation to release the things that have held you back from living your life freely! <3